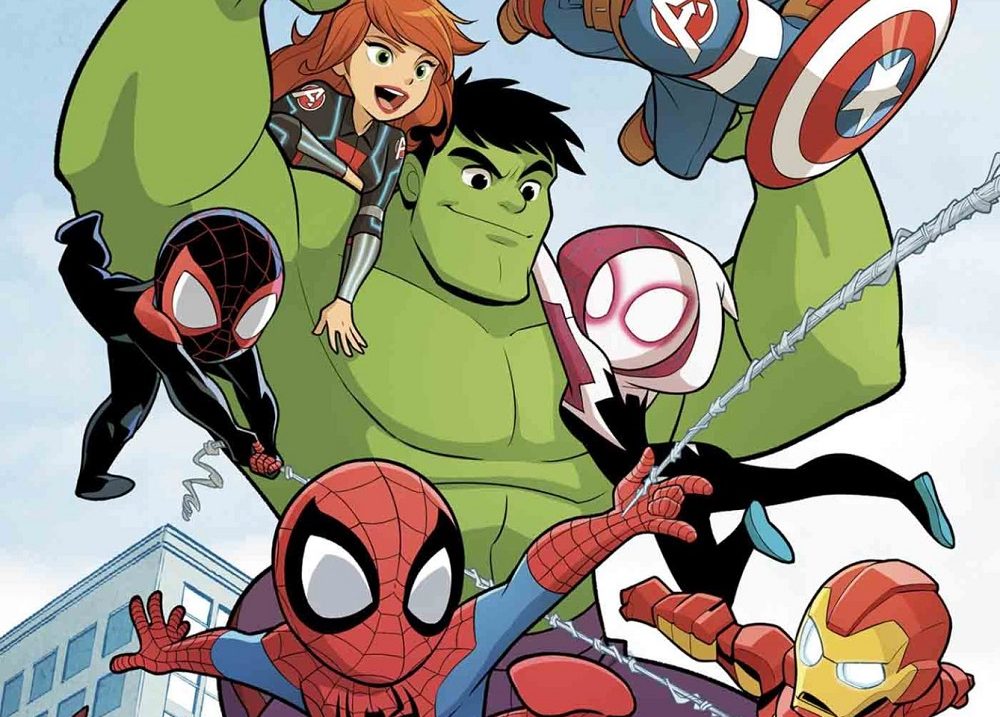 So many little kids love superheroes! 😊

In April Marvel start a 5 issue series of short comics for all ages! We want this to be a massive seller so Marvel make more!

Kids want comics of the superheroes they see in movies and cartoons, but many new Marvel superhero comics are written more for teenagers and can go over the heads of younger readers.

So this is an opportunity we shouldn’t miss!!
If lots of people order this comic, Marvel will be more likely to keep this series going, and make others!

This mini series of 5 comics will be monthly and each comic will contain a stand alone story featuring Spider-Man teaming up with different heroes.

Looks like in the first story, Spider-Man will pay a visit to Wakanda!

hits shelves on 20th of April…

SPIDER-MAN SWINGS INTO WAKANDA IN AN ADVENTURE FOR ALL AGES!
•  Wakanda?! You mean the home of the Black Panther, one of the world’s fiercest warriors and a member of the Avengers?
•  That’s right! When Spider-Man’s archenemy Doctor Octopus goes on the hunt for the incredible metal Vibranium, it’ll take the combined might of not one, but TWO beloved heroes to take him down!
•  Can Spider-Man and Black Panther work together to keep Vibranium out of Doc Ock’s eight hands – or will the villain turn the tide?

The second story in the series is THE SPIDER-DOCTOR!

SPIDER-MAN JOINS DOCTOR STRANGE ON A MAGICAL MISSION FOR ALL AGES!
•  When his spider-sense starts tingling in the West Village, Spider-Man swings into action. And he knows just where to go: the Sanctum Sanctorum, home of the Master of Mystic Arts – Doctor Stephen Strange!
•  And the good doctor needs Spidey’s help! The villainous Hela, goddess of the Asgardian underworld, is dead set on destroying the world. And thanks to her, Doctor Strange and Spider-Man are stuck on the astral plane – unable to use their powers!
•  Can Doctor Strange and Spider-Man help each other find their inner heroes in time to stop Hela and save the world?

A standing order is the best way to make sure you don’t miss an issue.
It’s a commitment to buy the comic when each issue arrives. In return we reserve a copy for you AND give you 10% off the regular price!
We even offer them for mail order customers!
Just add MARVEL SUPER HERO ADVENTURES to your standing order and all five of these stories will be put aside for you!

The third story will feature Hawkeye and Ant-Man!

Due for release 29th of June

HEROES OF ALL SIZES – TO THE RESCUE!
The astonishing Ant-Man is in trouble! But when his daughter Cassie calls Spider-Man for help, Spidey finds out he’s not the only hero in town! West Coast bigshot Hawkeye, A.K.A. Kate Bishop, is already on the case. They’ll soon discover that two shots are better than one – especially when you’re facing Taskmaster, the villain who can mirror any fighting move! It’s a triple dose of heroes in Marvel’s latest all-ages adventure!
ALL-AGES

If you have a standing order for MARVEL SUPER HERO ADVENTURES, each of these comics will be automatically reserved for you, all you have to do is collect them!

Add to your standing order
Collect a Series