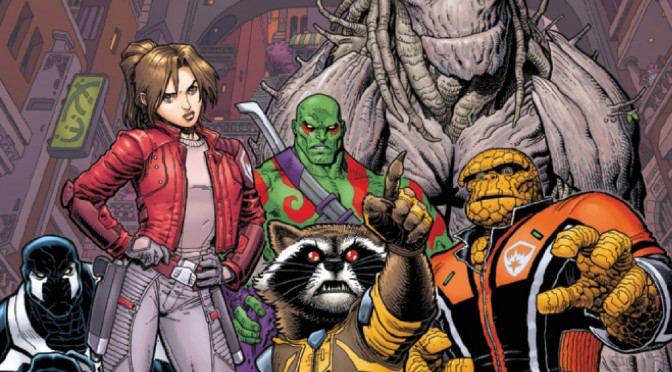 The All-New All-Different Marvel Universe keeps rolling out, with exciting new corners being revealed for readers of any taste! Check out the titles that started last week HERE. This week (16th of October) we get Spiders, Captains, and more on Earth and beyond.

If you spot something you want, don’t risk missing out…
ADD IT TO YOUR STANDING ORDER

Written by Nick Spencer with art by Daniel Acuña

When Steve Rogers was restored to his natural age, he chose one of his closest and most trusted allies to take up his shield. Now Sam Wilson, formerly the Avenger known as Falcon, carries on the fight for liberty and justice as the all-new, all-different Captain America!

Written by Brian Michael Bendis with art by Valerio Schiti
THE RACCOON’S IN CHARGE!

Peter Quill has abandoned the Guardians and his role as Star-Lord to be Emperor of the Spartax. Rocket didn’t wait a single minute to take the reins and become team leader of Drax, Venom, Groot, Kitty Pryde (A.K.A. Star-Lady ?!?!) and new Guardian BEN GRIMM, the everloving THING!

Written by Al Ewing with art by Gerardo Sandoval

EVERYTHING IS NEW. In the wake of SECRET WARS, the old order changeth – and Bobby DaCosta, Sunspot, is just the man to changeth it. Welcome to AVENGERS IDEA MECHANICS – a super-scientific global rescue squad of tomorrow’s heroes… today! America doesn’t want them! S.H.I.E.L.D. doesn’t know what to do with them! But Earth might not survive without… the NEW AVENGERS!

Written by Jason Latour with art by Robbi Rodriguez

BECAUSE YOU DEMANDED IT!

Gwen Stacy is back in the webs and has an all-new, all-different mystery to solve: the reappearance of The Lizard! Spider-Woman was convinced that the Lizard died in her arms along with Peter Parker. But when a similar monster goes on a reptilian rampage, she’s left with doubts not only about Peter’s life, but his death as well. And witness the debut of the Osborns of Earth-65! Fan-favorite creators Jason Latour, Robbi Rodriguez & Rico Renzi are back for more with a story that every Spider-Fan will be talking about!

Written by Peter David with art by Will Sliney

2099 IN YOUR CALENDARS, #1 IN YOUR HEARTS.
With a job at PARKER INDUSTRIES, a stable relationship, and uncertain of what impact his actions will have on the future, Miguel O’Hara has decided that it’s time to hang up the webs and retire from being Spider-Man. But when a dangerous new threat appears and puts his new life in jeopardy, he’s got no choice but to don some new threads and tackle the problem the only way he knows how: head on! By the webslinging wonders Peter David and Will Sliney (you know ’em, you love ’em.) this is one EXPLOSIVE Spider-Title you won’t want to miss.

Written by Gerry Duggan with art by Ryan Stegman

New team, same mission. Steve Rogers has formed a new Avengers unity squad compromised of humans, mutants and…Inhumans? A new threat to the Avengers is revealed. Wait, is that Deadpool on the cover? Is he seriously an Avenger now?

WHAT IF INFINITY AVENGERS

What if the AVENGERS lost the war?
• Years after the fall of Earth, CANNONBALL leads a small team of surviving mutants in the deepest parts of space looking for shelter. Eventually they meet up with a few surviving Avengers who had go to great and scary lengths to survive…