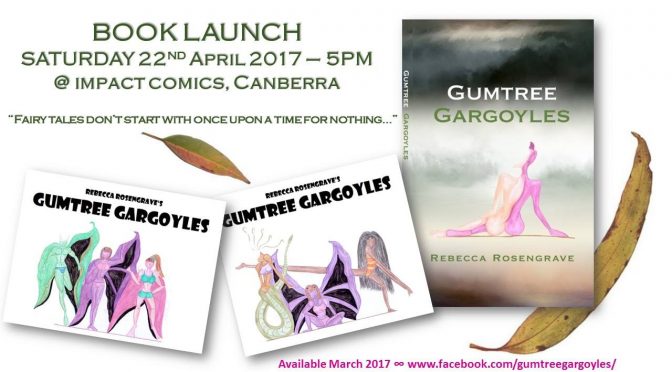 In 2015, author Rebecca Rosengrave lost her father to mental illness, after fifteen years of her father refusing to seek help and her family imploring the Canberra authorities to assist. With the health system having no power to intervene, she watched her father suffer a long and painful demise that culminated in him living alone, as a hoarder and battling alcoholism. He was found dead at his home by his family, who after being unable to contact him had arrived to check on him.

The tragic loss of her father saw Rebecca escape to Sweden. Her debut novel, Gumtree Gargoyles came to life in Gothenburg, when one night, as she says herself, “I got ridiculously drunk one night beyond what I had ever been before and woke up very seedy the next morning, next to my laptop. When I looked at the screen and read what was there, I realised the first couple of chapters of my first novel had been written…. This is how the book began.”
The book is set in her hometown of Canberra and the characters are inspired by her family. It tells the tale of a young woman called Katie, whose father’s recent suicide has left her with a most unusual inheritance – the guardianship of a nation.
Whilst the story explores several Canberra-centric themes and is cloaked in fantasy and surrealism, it also reminds the reader that sometimes life can be hard – but that there is always light at the end of the tunnel.

Rebecca says, “This book is what I call, the ‘last year of my twenties crisis.’ My life changed drastically when I was 29. I left a really unhealthy relationship, left my high-flying job, sold everything I owned and ran away to Sweden. I ran to the farthest place I could think to escape it all. For me this has been cathartic. Writing this all out in a way that entertains has helped me process my situation and deal with it emotionally.”

This book will appeal to lovers of fantasy and mythology…. and remind everyone of how tumultuous a time your twenties can be.

The launch runs from 5pm – 7pm on Saturday 22nd of April at Impact Comics.
To make sure there are enough copies of the book (and enough bubbles and nibbles) bookings are essential (and free)