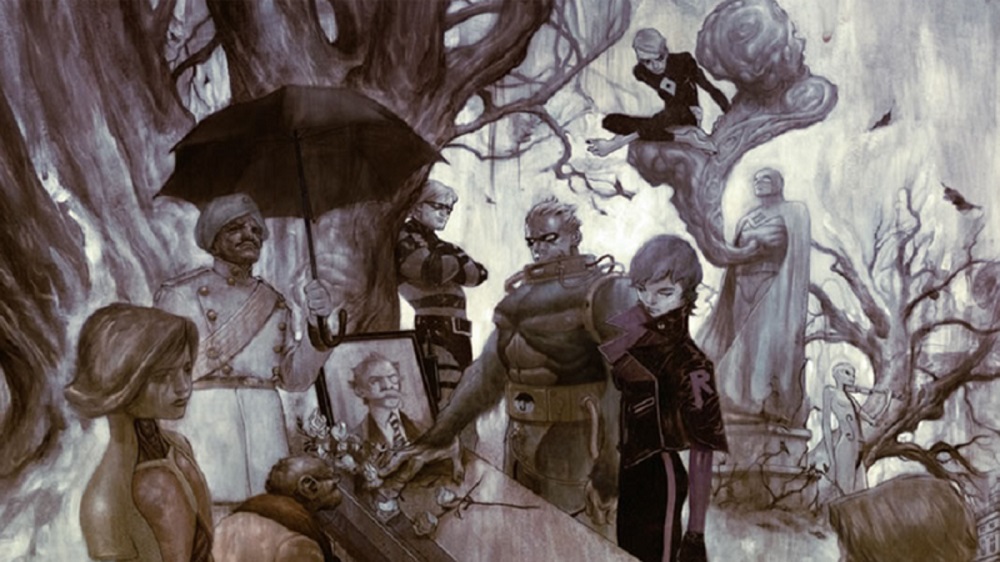 So you’ve discovered The Umbrella Academy thanks to the Netflix series…
It’s time we let you in on a little secret, super hero comics often aren’t at all intended for kids. And while they are built on the familiar idea of super powered people in costumes fighting bad guys, often the best stories are what happens in between, or after the fights. And sometimes the biggest threats aren’t the costumed villains…

Just in case you haven’t started yet, you can grab The Umbrella Academy comics right here. There are two volumes available now, with the third story due to be collected in mid/late 2019.
The Netflix series steals bits and pieces from the first two volumes…

Yep, that other TV series that spun out of Titans… It’s based on one of the oldest, weirdest super hero comics.

It was about a wheelchair bound old scientist who took in weirdos and misfits with unusual abilities and saved the world from strange happenings… It was clearly part of the inspiration for the creation of the X-Men in the Silver Age, and is still inspiring new ideas today.

The Grant Morrison run in the 1990s inspired the Umbrella Academy and cemented the characters as a mature readers property. It embraced the weird and cerebral, expanding the lineup, and developing stories that defied understanding.

And Gerard Way followed his run on The Umbrella Academy by having his own shot at writing a Doom Patrol story for the new Young Animal imprint!

Black Hammer tells the story of the former superheroes of Spiral City who seem to have been “retired” to a strange sleepy rural town that seems to exist in its own dimension. They want out, and someone is trying to get them back…

Another one that has been recently turned into a series.

From the writer of PREACHER and the artist of TRANSMETROPOLITAN, this series is about the super powered covert team the government sends out when superheroes try to actually fix real problems, or change the status quo controlled by the connected elites. It explores the concept of ultimate corruption created by ultimate power, in politics, sex, money, and super powers. Really, really not for kids.

The League of Extraordinary Gentlemen

Imagine all of the western literary canon was part of the same “universe” the way comics superheroes have their combined universes.
And then imagine a super team was assembled including Mina Harker from Bram Stoker’s Dracula, Alan Quartermain from
King Solomon’s Mines, The Invisible Man, Doctor Jekyll, and Captain Nemo to save the world.

Created by Alan Moore, this series is wall to wall literary references, from the heroes, to the villains, the locations, and more.

Inspired the movie in name only. Nothing like it. There was a whole court case about it.

One of Alan Moore’s most famous comics. Dissecting the line between good and evil in a world of costumed vigilantes. The characters in this story were inspired by the classic comic characters published by Charlton Comics. What happens when the most powerful man in the world no longer cares for humanity, and the most powerful mortal believes that his ends justify any means?

This inspired the Snyder film and the upcoming TV series.

A group of boys in the 1960s played a game of heroes saving the world from an evil tyrant. Thirty years later humanity is on the brink of extinction, and it appears it is all caused by the evil tyrant they imagined for their game as children. Are these ordinary adults and their childhood games the world’s only hope?

There are two live action Japanese movies inspired by this cult series.

The children of the world’s greatest superheroes are not all on the same page and the fall out is not going well for the rest of us.
Imagine a public spat of spoilt celebrity children, with crazy super powers.
from Mark Millar, the creator of Civil War, Superman Red Son, Wanted, and Kick-Ass.

Word is this is getting adapted for the small screen.

From Brian Michael Bendis, the creator of Miles Morales and Jessica Jones, comes a tale of hard boiled homicide cops in a city full of superheroes.

The Powers squad specialises in homicide involving super powered people.
The types of murders, and the motives behind them are unlike anything any other cop has to deal with.

This series inspired a TV show too!