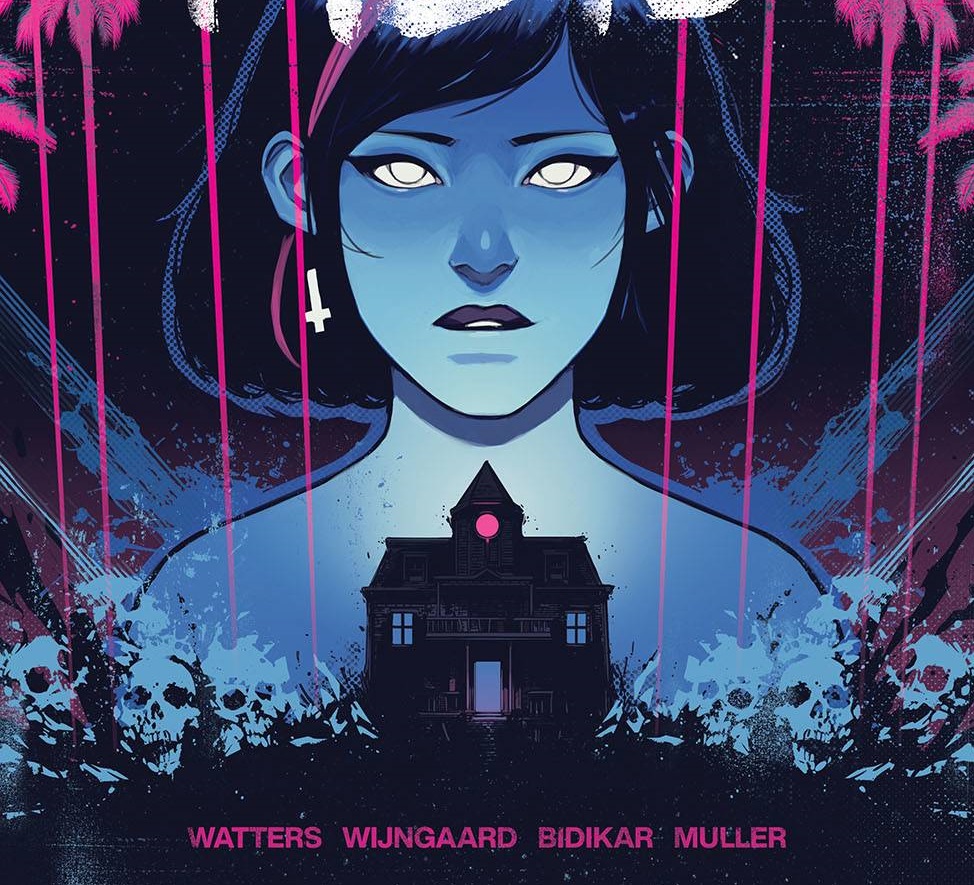 Orders for these new comics series close on Monday 16th of November. DON’T MISS OUT! Click the button to start a standing order so you don’t miss an issue.

In the summer of 1994, a haunted house walks across California. Inside is Ami, lead singer of a high school punk band-who’s been missing for weeks. How did she get there, and what do these ghosts want? Expect three-chord songs and big bloody action that’s Power Rangers meets The Shining (yes, really).

Return to Eden, Wyoming in two thrilling tales from Top Cow’s Talent Hunt winners! Can Sheriff Roy Magnum really maintain order in a town full of criminals? Plus, a glimpse inside the mind of Molly, Eden’s own serial-killing boogeyman!

“THE VICIOUS CIRCLE REBORN”
The notorious criminal organization known as the Vicious Circle has left Chicago and found a new home-in Toronto, Ontario, and their only obstacle is Malcolm Dragon, son of the Savage Dragon. But Malcolm Dragon was already in over his head before their arrival. How can he possibly hope to survive?

After paying off their debt to Drez Vina, Vox Machina enjoy a week in Westruun’s lap of luxury. But that costs coin, which has a bad habit of running out. So to keep themselves in the black (and the taverns, and the brothels) they agree to join an underground fighting ring. But before they can bash their way to cash, their attention is snagged by the case of a missing child.

If you think you can unlock the gates of Hell and just invite yourself in, you must be Dreaming!
The Sandman Universe crossover begins here, with this specially priced re-introduction of the storylines and characters who populate next month’s landmark event series.

First, in the Eisner-winning Locke & Key tale, “Open the Moon,” meet Chamberlin Locke, patriarch of the Locke family, whose Moon Key began to unlock the events of this event series.
Next, journey with the Lord of Dreams to Lucifer’s domain in the chapter of Sandman’s epic “Season of Mists” storyline that sees the Key to Hell change hands in a most momentous way.

And join IDW and DC Comics next month for Locke & Key: Hell & Gone #1 by L&K co-creators Hill and Rodriguez!

You’re fifteen years old. You’re suddenly granted incredible powers. Cool, right? There’s only one problem: you can only use your powers for ten minutes at a time. What do you do when you have to save the world but you only have ten minutes to do it? This is the problem faced by Oliver Leif, a teenager who has just moved to a new town, and a new school, and is having a hard enough time navigating classes and his crush before the inter-dimensional monsters started showing up.

A KING IN BLACK tie-in.

THE CAT IN BLACK IS BACK!
Feeling lucky? Knull’s attack on Earth interrupts the Black Cat’s latest heist, and if you know Felicia, you know that’s a problem. So the Cat and her crew aim to steal something of greatest value to both Knull and Earth’s hope of survival. You’ll have to pick up this issue to find out what! This issue guest-stars the X-Men! Captain America! And Doctor Strange! DO NOT MISS IT!!!

Celebrate Chris Claremont’s enormous impact on your favorite Marvel comics of the past five decades with an all-new story! Dani Moonstar is drafted for a mission across time and space for an incredible psychic showdown against the Shadow King-joining forces with characters created and defined by the pen of Chris Claremont!

A PRESENT FOR THE HULK!
The Hulk is in a bad place. Half of his alters are dead or missing – including Bruce Banner – and the Leader’s got the rest of him on the ropes. But never let it be said that Joe Fixit doesn’t know how to have a good time – and he’s out to make sure this is the best holiday the Hulk’s ever had. He just has to fight his way through a planet of symbiotes first.

BY CROM, YOU’VE NEVER SEEN A CELEBRATION LIKE THIS – MARKING 50 YEARS OF CONAN THE BARBARIAN IN COMICS!
Revelations, surprises and savage action prevail in the all-new KING-SIZE CONAN! In 1970, Roy Thomas brought CONAN THE BARBARIAN, a creation of author Robert E. Howard, to Marvel Comics. With art by the incomparable Barry Windsor-Smith, CONAN THE BARBARIAN #1 introduced the Hyborian Age to a whole new audience, paving the way for decades of comics and Conan’s conquest of pop culture.
Now get ready to celebrate 50 years of CONAN with an oversize special spanning the breadth of Conan’s life and times by the most dazzling array of creative talent ever assembled in one book to tread the jeweled thrones of the Earth!
Experience Roy Thomas and Steve McNiven’s all-new prelude to that original story from 1970!
Thrill to a tale of revenge by Kevin Eastman (co-creator, Teenage Mutant Ninja Turtles), writing and drawing his FIRST Marvel story!
Chris Claremont and Roberto de la Torre team up to unveil a turning point in Conan’s career as a mercenary!
Kurt Busiek and Pete Woods recount an early brush with sorcerous forces that will shape Conan’s destiny!
Conan and Bêlit sail together again for the first time since the 2019 relaunch, with Jes s Saiz illustrating the Marvel Comics maiden voyage of Steven S. DeKnight (Netflix’s DAREDEVIL writer/director/showrunner)!
The perfect introduction for new fans, and an essential adventure for die-hards, this is the can’t-miss CONAN comic of the decade!

Under a series of incredible covers by Linser, Geovani, Golden, Suydam, and a cosplay cover — Red Sonja faces the gallows!  For all the blood she spilled, there is a price.  This is the tale of how she came to such a pass.

Welcome to THE PROJECT, an interdimensional collective of superheroes, tasked with recruiting members from across infinite worlds. And their newest recruit is…VAMPIRELLA!?

Superstar writer DAN ABNETT and artist PAUL DAVIDSON bring you the first chapter in an epic tale that will affect thousands of planets, billions of lives, and will answer the question: “What happens when you ask a vampire to save the universe?”

When two young siblings excitedly unwrap their final Christmas presents, they discover toy robots unlike anything they have ever seen. And with good reason. What the kids and their parents don’t know is that their quaint suburban home just became the beachhead for these self-aware ‘bots that have begun to explore the outside world. And when one of the ‘bots breaks bad, it’s going to take a Christmas miracle to stop him.

Robert E. Howard’s Conan is brought to life UNCENSORED!  Discover the true Conan, unrestrained, violent, and sexual.  Read the story as he intended!

The only survivor of a ferocious battle, Conan sits in the midst of a bloodstained snow field. When the fight is over, the Cimmerian suddenly finds himself overcome with deep weariness and disgust. Until the moment he meets a redheaded woman of supernatural beauty, blinding like the glow of the sun on the snow. Moved by a burning desire, Conan decides to follow her but finds himself caught in a trap, attacked by two titans. In his ardor, he was not suspicious…he did not imagine for a second that his bride was none other than Ymir’s own daughter: the frost-giant!

A mythical tale both in both form and substance, The Frost-Giant’s Daughter is masterfully adapted by Robin Recht, who manages to capture the essence of this whirlwind tale of violent desire…a true love trap in which the force of will of the Cimmerian is put to the test.  As a bonus, also includes Robert E. Howard prose story from Weird Tales!

Five high school kids, soon to say goodbye to each other and to the lives they have known, enter the Nightmare House, the source of local legend and superstition. What they discover within the crumbling old house fills them with terror – a human brain, floating in a jar of murky liquid. Soon, the teens find themselves stalked by a vicious killer, a murderer intent on building itself a new body. Piece by piece.
The first in a new series of prestige format one-shots from AfterShock by the top creative talent the industry has to offer, PIECEMEAL is conceived and written by Cullen Bunn (DARK ARK, KNIGHTS TEMPORAL, BROTHERS DRACUL, WITCH HAMMER) and drawn by Szymon Kudranski (BLACK-EYED KIDS, Spawn, Punisher).

Endless Winter chapter six! Crush, Roundhouse, Kid Flash, and Red Arrow embark on a bonding exercise with new partners from the original New Teen Titans: Donna Troy and Beast Boy? Everyone’s limits will be tested as they brave the challenges of holiday shopping in Manhattan! And then, the city is buried in snow! When they discover a teen whose powers are triggered by the extreme cold, the team must decide if this new arrival is a future hero or villain. And in the past, Black Adam battles the Frost King with devastating consequences.