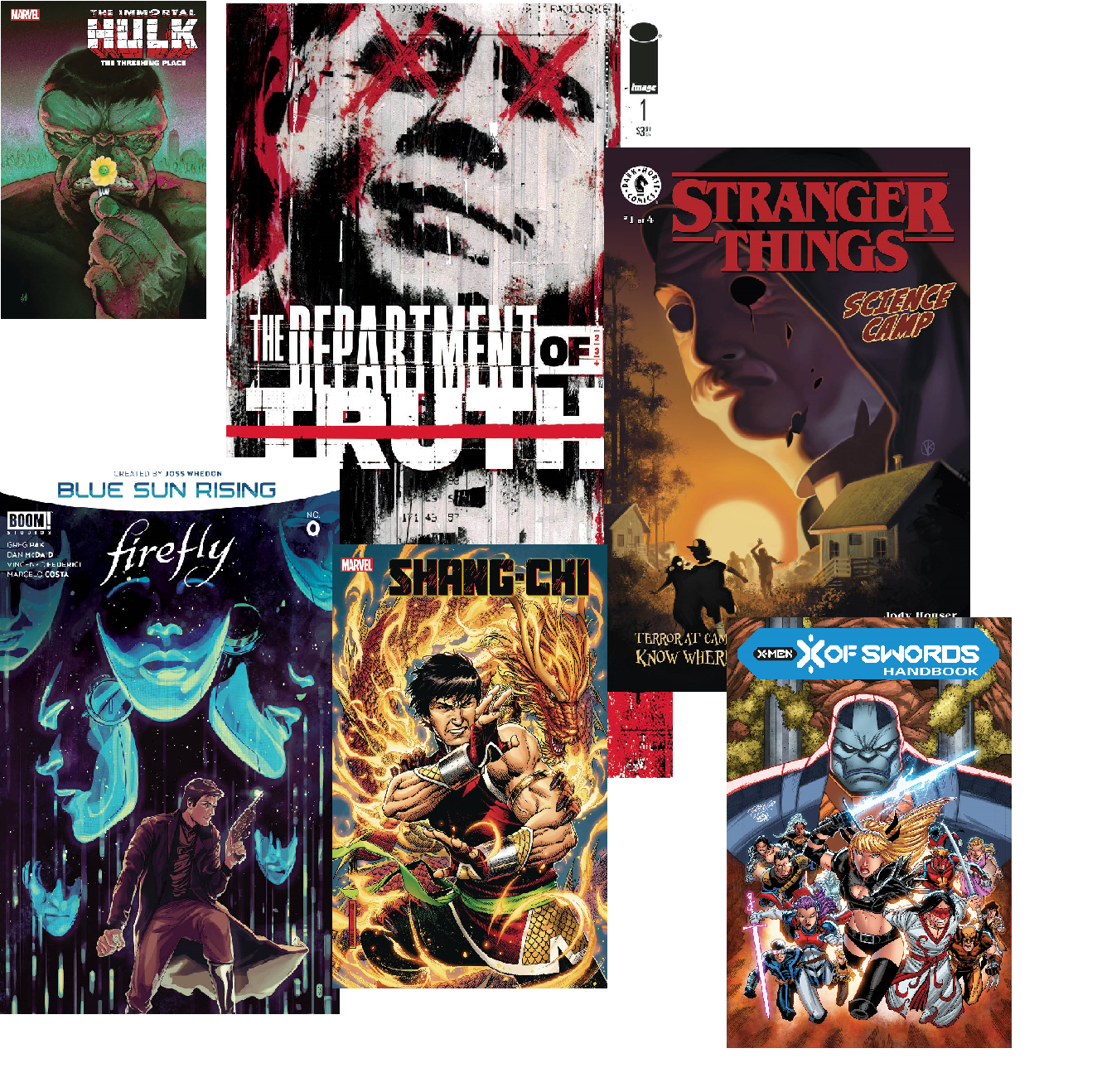 We place orders a few months in advance (check out the latest catalog HERE) but lots of titles get a last minute chance to adjust orders. These titles are due to arrive on the 2nd of October, last chance orders are due 7th of September…

SERIES PREMIERE! Cole Turner has studied conspiracy theories all his life, but he isn’t prepared for what happens when he discovers that all of them are true, from the JFK assassination to flat Earth theory and reptilian shapeshifters. One organization has been covering them up for generations. What is the deep, dark secret behind the Department of Truth? Bestselling writer JAMES TYNION IV (Batman, Something is Killing the Children) debuts his first Image ONGOING SERIES alongside breakout artist MARTIN SIMMONDS (Dying is Easy)! PREVIEW>>

Dustin arrives at Camp Know Where to navigate the new social hierarchy without the support of his Hawkins adventuring party. While also faced with nerdy bullies, a new menace haunts the young scientists and camp counselors. A mysterious figure with sinister intent arrives to disrupt the serene woodland scene. The solution won’t take rocket science, but Dustin will have to get on the same wavelength as the other campers before tensions reach a boiling point.

This issue launches a new series of TMNT reprints that showcase the best stories of your favorite TMNT characters! Featuring tales from different publishers, this first issue showcases the ever-surly Raphael! At almost 100 pages, this is your one-stop-shop for all things cool but rude!

CELEBRATING THE CLASSIC’S 45TH ANNIVERSARY!
Forty-five years ago, a comic book came out that would change the face of Marvel Comics forever. Writer Len Wein and artist Dave Cockrum revamped the X-Men completely, replacing the bulk of the teen heroes with a completely new international cast! The legendary one-shot took comic fans by storm and set the series off in a new direction, setting the stage for the legendary X-scribe Chris Claremont to make them the most popular heroes in the Marvel Universe! Now, 37 of Marvel’s top artists come together to re-create this epic story, each re-drawing one pulse-pounding page in tribute to this Marvel masterpiece!

TWO OF COMICS’ MOST IMAGINATIVE TALENTS UNITE FOR A HULK TALE LIKE NONE OTHER!
There’s a monster raging in America’s heartland – and it’s not the Hulk. When a young girl goes missing on a Kansas farm, Bruce Banner gets the itch – the one that tells him gamma is on the loose. But this town doesn’t take kindly to strangers – especially the big, green, violent kind. Can the Hulk save a child before it’s too late, or is he about to take the blame for another massacre?

THE MASTER RETURNS! An ancient and evil secret society has stayed in hiding since the death of their leader, Zheng Zhu. But now his successor has been chosen to shift the balance of power in the world…Zheng Zhu’s son, Shang-Chi! Witness the Marvel Universe’s greatest fighter return to a world of death and destruction he thought he left behind long ago…and discover the secrets to Shang-Chi’s past that will change his world forever.
Don’t miss out on this epic tale of family, betrayal and justice as the incredible team of Gene Luen Yang (American Born Chinese), Dike Ruan (SPIDER-VERSE, BLACK CAT) and Philip Tan (UNCANNY X-MEN) launch a new chapter in the legend of Shang-Chi!

The dramatic new era for mutantkind takes center stage in the official handbook!
This all-new collection of X-Men-related profiles will bring you up-to-date on Apocalypse, Wolverine (Logan), Magik (Rasputin) and Meggan just in time for X of Swords! This issue includes profiles for Cypher, Moira MacTaggert, two Captains Britain (Brian and Betsy Braddock) and Krakoa itself! Plus: the young Cable (Nathan Summers) and the X-Men!

Sheriff Mal Reynolds has a new partner-a law enforcing robot from the Blue Sun corporation. If he wants to keep his job and protect his sector, he’ll have to play by Blue Sun’s rulebook.
* But the robots don’t care about motives, about mercy, about anything other than enforcing the law-no matter the cost.
* The Blue Sun Corporation has helped to run the ‘Verse from the shadows for years, but they’re ready to step into the light…and if Mal aims to stop them, he’ll have to put himself between his people, and a corporation that is ready to take over the ‘Verse.
* There is only one thing to do-reunite the crew of the Serenity for one last impossible job.