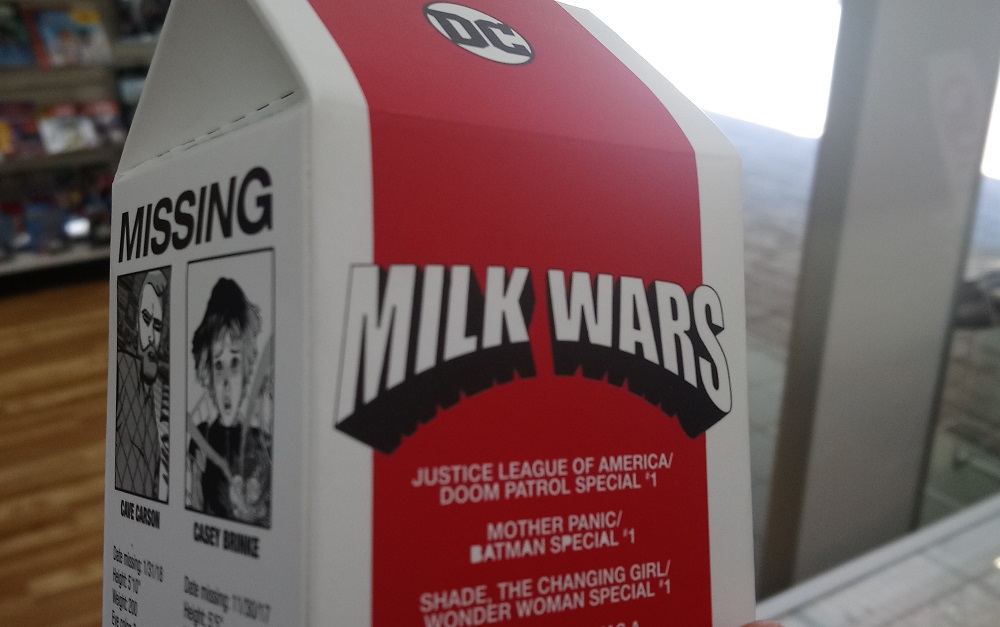 Welcome to the un-event of the year! Kicking off a line-wide adventure, The Gerard Way crafted Young Animal imprint collides with the classic DC Universe to bring you a different kind of crossover in weekly parts starting on the 2nd of February.

Part One hits shelves on Friday 2nd of February. Then a new part follows each week. Add MILK WARS to your standing order so you don’t miss an issue.

The Doom Patrol has discovered that an interdimensional corporation called RetCo has been stealing stories, reconfiguring them and repackaging them for new markets. Our gang of misfit heroes have felt the touch of this nefarious company, and it has already started to change them. Even scarier, though, is how deeply RetCo has embedded itself into current continuity, using the radioactive milk of psychic cows to quell the more dangerous impulses of the Justice League and turn them into heroes safe for the masses.

And to kick this off, RetCo has gone all the way to the top.

Meet Milkman Man, heretofore unknown final son of Krypton, who was sent to our planet to save him from the destruction of his homeworld, only to be adopted by an evil dairy farmer and raised to love all things dairy!

Co-plotted by Steve Orlando and Gerard Way, with art by ACO (MIDNIGHTER), this extra-sized special starts “Milk Wars” with a splash! Plus, who is Eternity Girl, and how does she connect to this whole scheme? A special four-part back-up feature by Magdalene Visaggio (Kim and Kim) and Sonny Liew (The Art of Charlie Chan Hock Chye) begins here.

Mother Panic has discovered a Gotham City transformed. What happened to her family and friends? And who moved into Gather House, the religious school that scarred Mother Panic as a young girl? It’s Father Bruce, the orphan millionaire who decided to give back to society by filling the deep demand for sidekicks. So many Robins in need of a nest! Plus, part two of the Eternity Girl backup story!

Shade has been split into multiple parts, each representing a different mood, all in service to the perfect and beautiful Wonder Wife. But Happy Shade is starting to sense that not all is right in Wonderland, and she finds something strange staring back at her on the other side of the looking glass! Plus, part three of the Eternity Girl backup story!

Swamp Thing has detected a disturbance in the Green, and his hunt for it has led him to RetCo headquarters. There he finds Cave Carson and his crew struggling against being assimilated into RetCo’s diabolical narrative. Is it possible for Swampy and Cave to destroy the organization from the inside? Plus, find out how their efforts help Eternity Girl in the final installment of her backup story!

As RetCo’s foundation shatters, the Young Animal teams come together with the Justice League and even more DC Universe heroes to finish the job. The only problem is, Milkman Man and RetCo still stand in their way. To right reality, the heroes of Young Animal and the DC Universe will have to unlock an outrageous power never before seen on any world!
This mind-blowing conclusion will establish new realities for all of the DC’s Young Animal titles. Look for the return of Cave Carson, Shade and Mother Panic in March!

Add to your standing order
Collect a Series