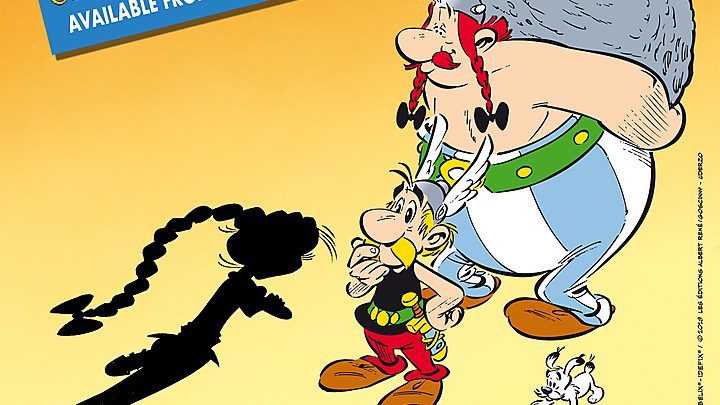 The next volume of Asterix, Asterix and the Chieftain’s Daughter, is due for worldwide release on 24th of October and now we’ve seen the cover revealed!

We’ve heard rumours copies are already in the country!

We’re getting pretty excited. This is the 38th volume in the Asterix series, and the fourth volume from the new creators Jean-Yves Ferri and Didier Conrad.

Details have been guarded pretty closely, but Bleeding Cool scooped a picture of the cover of the French edition! So now we see the revealed cover of Asterix and the Chieftain’s Daughter, or as it is called in French, Asterix La Fille de Vercingetorix

In English it will be called Asterix and the Chieftain’s Daughter and that’s almost all we know!

This book will have a print run of 5 million copies and be the biggest, fastest selling comic this year. Don’t miss yours!

The next action-packed adventure from Asterix and Obelix!

60 years after his first appearance in the pages of Pilote, the hero created by two geniuses of the 9th art, René Goscinny and Albert Uderzo, is back! If Asterix and Obelix thought they could recover from their previous journey in the tranquility of their beautiful Armorica, they have failed! Escorted by two Arvernes chiefs, a mysterious teenager has just arrived at the village. Caesar and his legionnaries seek her, and for good reasons: In the village, it is rumored that the father of the visitor would be no other than … the great Vercingetorix himself, once defeated at Alesia! On October 24, Asterix & Obetix return in a new adventure that will be called The daughter of Vercingetorix, always imagined by the famous tandem Jean-Yves Ferri and Didier Conrad.

“What we know,” reveal the two authors, “is she’s a revolting teenager. That’s normal, it’s not easy to be called Vercingetorix”” We have pretty much investigated her for the book: her appearance, her name, her character … As you know, Vercingetorix was very discreet about his Privacy, and historical sources are rare. But you will see, we managed to get many scoops!”