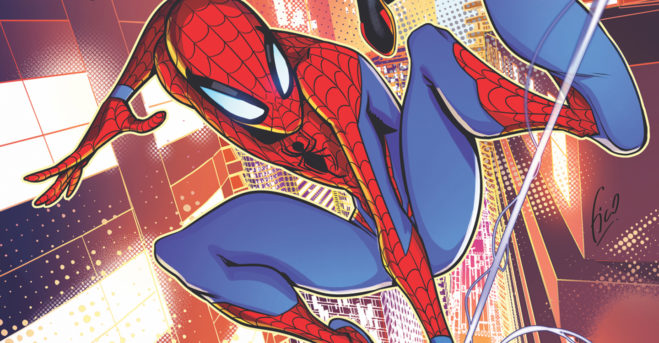 A brand new ongoing comics series for fans of all ages featuring Spider-Man kicks off in November. Order early so you don’t miss an issue!

Kids of all ages love the superheroes of the Marvel Universe, but sometimes finding a comic book featuring those characters can be tricky for younger fans (I know, it’s ridiculous! But we are working to fix this.)

IDW comics, the publishers behind the recent amazing comics featuring The Teenage Mutant Ninja Turtles, the Transformers and Uncle Scrooge, have now got the rights to make amazing all-ages friendly Marvel superhero comics!

Their range of all-ages Marvel comics kicks off with SPIDER-MAN #1 on Friday 30th of November!

The timing is perfect!

It will be right at the time everyone is super excited by the release of the animated Spider-Man: Into The Spider-Verse movie, so some of those characters such as Miles Morales, and Gwen Stacy: ghost Spider will be in the comic too!

This is THE comic every kid will be talking about over the Christmas holidays. Don’t miss your chance to secure a copy (or two.)

Reserve a copy to get the best price

Collect the whole series with a STANDING ORDER

The creators are tops!

This new series is created by an amazing all-star team.
the writing duties are being handled by Delilah S Dawson, an accomplished YA novelist, who can easily slip into fantasy, sci-fi and horror – Including Star Wars Adventures comics!

And the art is being handled by Fico Ossio who’s done amazing work on Orphan Black, Transformers and Skylanders comics!

And there is more to come!

There will be a new issue of this all-ages Spider-Man series at the end of each and every month. Make sure you have a STANDING ORDER so you don’t miss a single issue!

But that’s not all!

This is just the beginning of a wider range of all-ages Marvel comics.

Collect the whole series with a STANDING ORDER
Collect a Series