This week The Flash Annual has the set up for the biggest Flash story of the year!

END_OF_DOCUMENT_TOKEN_TO_BE_REPLACED 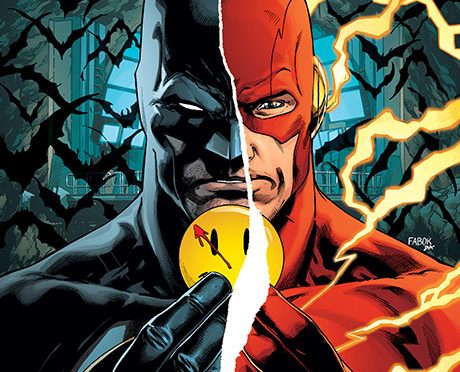 Why did The Comedian’s smiley face button badge appear in the Batcave? Isn’t that supposed to be in the Watchmen Universe?
Things are about to get weird… END_OF_DOCUMENT_TOKEN_TO_BE_REPLACED

The DC Rebirth Universe is taking shape, it’s not rebooting, or resetting but it is changing. It’s getting a few more wrinkles, it’s developing character. Get ready for the brave new DC Rebirth world with these one shot comics featuring Aquaman, Flash and Wonder Woman. END_OF_DOCUMENT_TOKEN_TO_BE_REPLACED

This week DC have a bunch of exciting new series starting!

Click here to add these titles to your standing order now!

An all-new series from the world of the highly anticipated new TV show The Flash! Follow the adventures of Barry Allen as he struggles to balance his job as a police crime scene investigator, his unrequited crush on Iris West (who also happens to be his boss’ daughter) and his new life as Central City’s guardian angel! Don’t miss out!

WELCOME TO GOTHAM ACADEMY! Gotham City’s most prestigious prep school is a very weird place. It’s got a spooky campus, oddball teachers, and rich benefactors always dropping by…like that weirdo Bruce Wayne. But nothing is as strange is the students!
Like, what’s up with Olive Silverlock? Is she crazy or what? Where did she go last summer? And what’s the deal with her creepy mom? And how come that Freshman MAPS is always following her around? And is she still going out with Kyle? P.S. Did you hear the rumor about the ghost in the North Hall?!
GOTHAM ACADEMY is a new, monthly teen drama set in the shadow of Batman and the craziness of Gotham City, with new characters and old plus a secret tie to Gotham’s past…

LOBO #1
Written by Cullen Bunn with art by Reilly Brown

The all-new Lobo brings the ultraviolence to his new ongoing series! If the first few blood-soaked pages of this issue don’t shock you – nothing will!