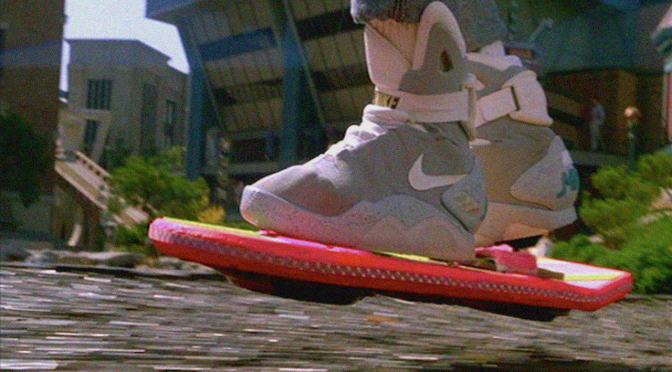 In 1985 one of the most successful science fiction films of all time captured the hearts and minds of a generation. That film ended with a tease for the sequel, with the heroes headed for the future, 21st October, 2015. Today is the future Marty McFly and Doc Brown flew to, and we’ve finally got our hoverboards!… What? Why not?!

Well, to be fair In Back to the Future II they are due to arrive mid afternoon in the US, so Australia is a bit ahead of their arrival, but I don’t think we’ve got our hoverboards yet.

OTHER NEWS:
MARTY MCFLY ARRIVES THIS WEEK IN COMICS

We do have a campaign to SAVE THE CLOCK TOWER…

It’s a bit bigger and in London… but you get the idea.

Instead we get STAR WARS 7, which is probably a good thing, but would have picked that?

Everyone is waiting eagerly for an announcement of self lacing Nikes.

Is the Nike Mag Coming? This Could Be a Major Sign That It Is – SneakerNews.com

But we all know that real hoverboards DON’T work on water, so…