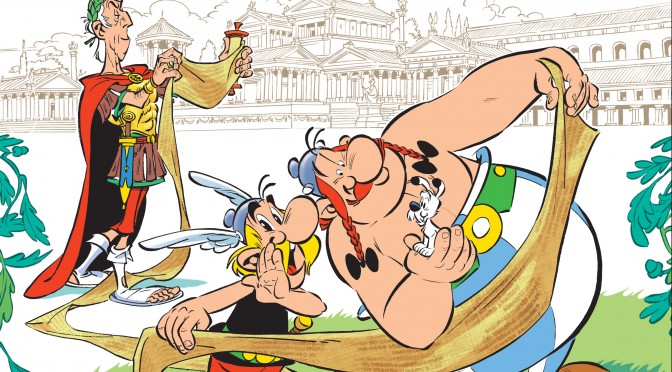 The 36th book in the ASTERIX series is hitting in October 2015. The story is inspired by Wikileaks and there will be 6 million copies printed worldwide, making it the biggest selling comic of the year already!

ASTERIX AND THE MISSING SCROLL

Two years after the hit album Asterix and the Picts, the characters created by René Goscinny and Albert Uderzo return in a new story written by Jean-Yves Ferri and illustrated by Didier Conrad.

It contains all the vital ingredients of an Asterix magic potion: the history of Rome and the Gauls is revisited and rewritten with plenty of gags and puns thrown into the mix! By Toutatis! Starting October 2015, the whole of Gaul will be busy… reading Asterix and the Missing Scroll!

Rene Goscinny was born in Paris in 1926, and spent most of his childhood in Argentina, before eventually moving to Paris in 1951. He died in 1977. Albert Uderzo was born in 1927 in a small village in Marne, France. He met Rene Goscinny in 1951 and on 29 October 1959 their most famous creation, Asterix, made his first appearance on page 20 of PILOTE.

ASTERIX THE GAUL, their first album, was published in 1961 and there have now been 35 Asterix albums.

Illustrator Didier Conrad was born in Marseille in 1959. He moved to America after his style got him noticed by Disney and Dreamworks, and in 1996 he designed the characters and storyboard for the 2000 animated film THE ROAD TO EL DORADO.

Jean-Yves Ferri lives in the Ari ge area of south-western France. Before writing the 35th Asterix album, he worked on the famous series Le Retour la Terre, as well as the adventures of a police officer named Aim Lacapelle.