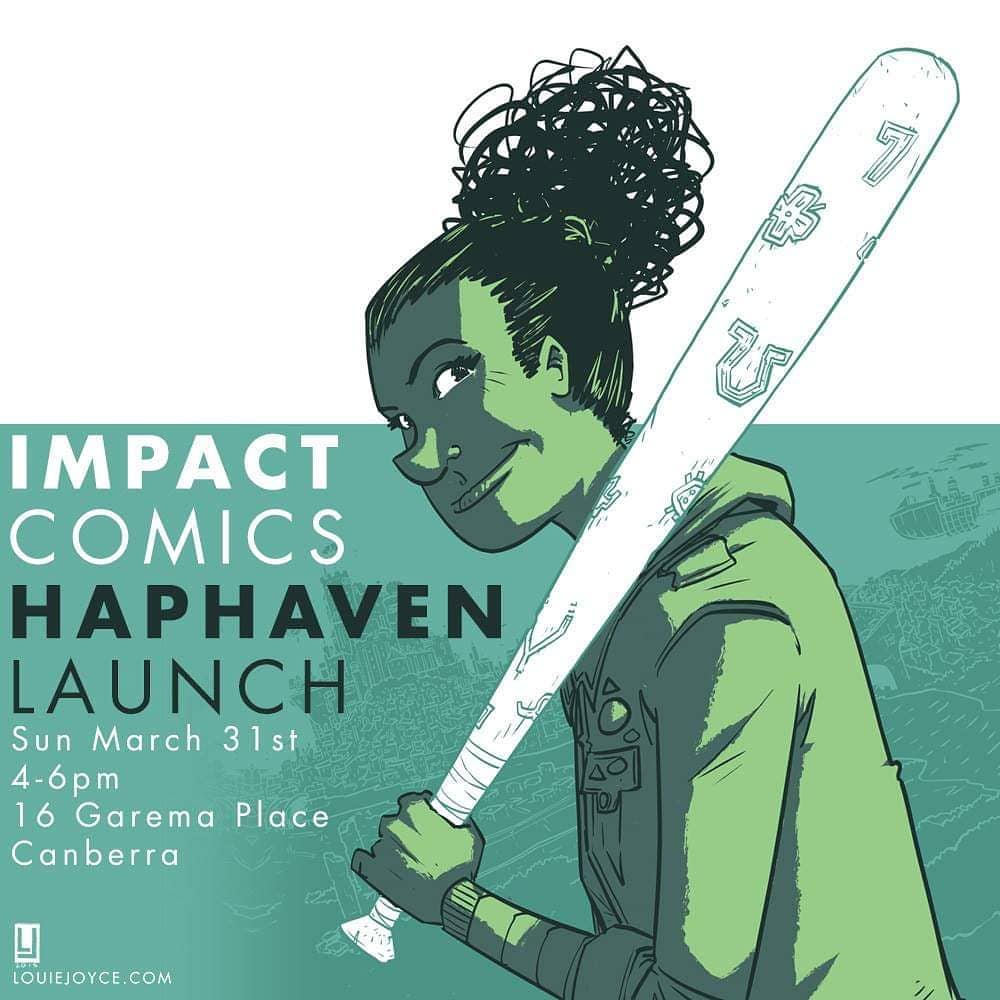 Award winning comic creator LOUIE JOYCE joins us from 4pm on Sunday 31st of March for an evening of talking comics and superstition to celebrate the launch of the new graphic novel HAPHAVEN!

Get an extra insight into creating comics as award winning comics writer RYAN K LINDSAY comes along to ask Louie all of the hard hitting questions you are too afraid to ask!

After stepping on a crack and breaking her mother’s back, ever superstitious Alex Mills must journey to Haphaven, the world where all of Earth’s superstitions draw their power. On the search for the lucky rabbit’s foot to save her mom, Alex learns that breaking with superstition might be the key to saving her mom, even if it means she could get jinxed along the way.

Louie Joyce has teamed with Eisner Award nominated writer Norm Harper to create an adventure into the realm of superstition.

Louie Joyce is an award-winning Australian comics creator and illustrator.

After spending his childhood dreaming of becoming an astronaut, superhero, futuristic bikie punk, enchanted mermaid or something cool like that, Louie realised he’d been dreaming a little too long and most that stuff was impossible anyway. Luckily he can draw pretty well so he’s able to experience all those things and more by putting pencil to paper. He CAN be an enchanted mermaid, y’know, if he wants to.

His comics include Past the Last Mountain (Winner of a 2017 Silver Ledger Award), The Many Harold Holts of Space & Time, Astral and self published books MISHMASH& HODGEPODGE.

Louie’s illustration work has been exhibited internationally and he’s worked for a wide range of clients creating illustrations for storyboards, animation, publishing and concept development.

Louie will be joined in discussion by Ryan K Lindsay…

He has partnered with artist Eric Zawadzki to produce: ETERNAL through Black Mask Studios, and HEADSPACE, with Sebastian Piriz, through Monkeybrain Comics/IDW.

He has partnered with artist Sami Kivela to produce: BEAUTIFUL CANVAS through Black Mask Studios, DEER EDITOR through his own ‘Four Colour Ray Gun’ imprint and a handful of Kickstarter successes,  and CHUM through ComixTribe.

He was selected as a participant in the DC Writing Workshop group of 2016.

His other comics include: Aurealis and Ledger Award winning NEGATIVE SPACE with Owen Gieni through Dark Horse Comics,  GLOVES with Tommy Lee Edwards in the Vertigo CMYK anthology, as well as EIR with Alfie Gallagher, INK ISLAND with Craig Bruyn, and STAIN THE SEAS SCARLET with Alex Cormack through Kickstarter for ‘Four Colour Ray Gun.’

He’s written/edited analytical texts, including THE DEVIL IS IN THE DETAILS: EXAMINING MATT MURDOCK AND DAREDEVIL through Sequart, and has had essays published in Criminal, Godzilla, Sheltered, Strange Nation, and Crime Factory.

He is Australian and when not being a family man he hones his writing skills by sacrificing blood wombats to the outback spider fight clubs.