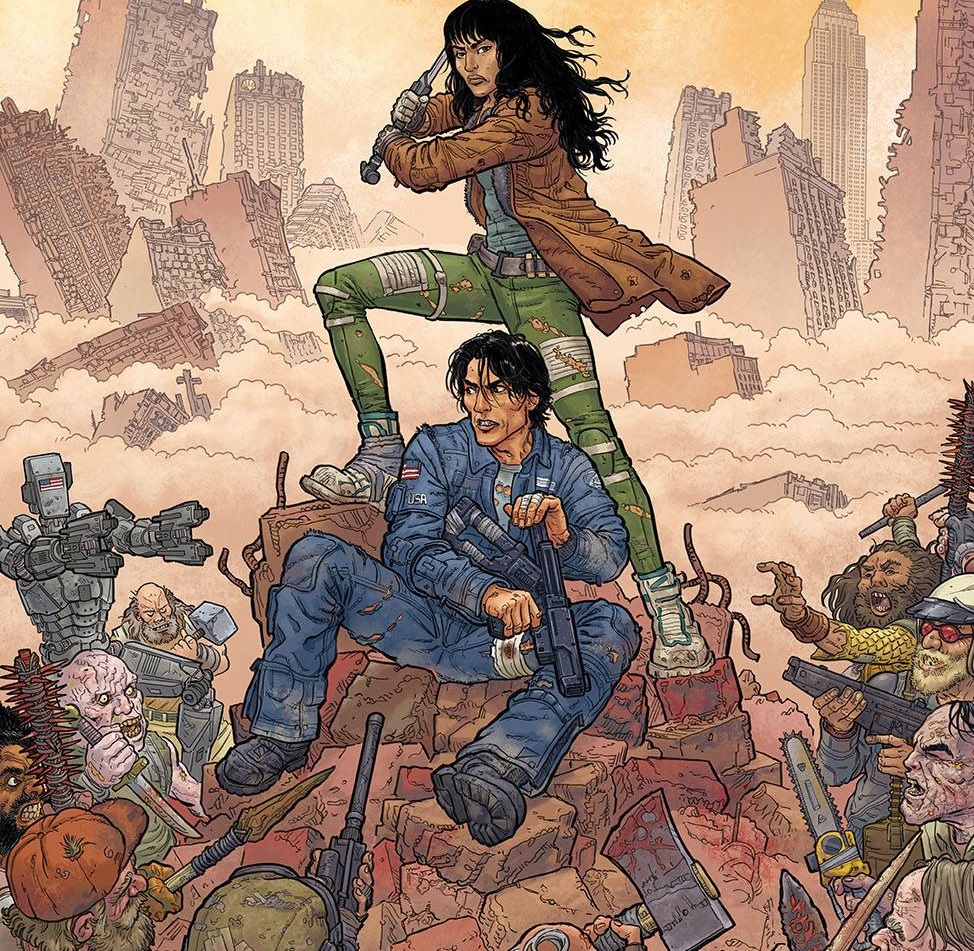 Orders for these new comics series close on Monday 23rd of November. DON’T MISS OUT! Click the button to start a standing order so you don’t miss an issue.

The Cheyanne mountain installation, aka The BUBBLE, is the most sophisticated super bunker in the world. It was built to ensure the survival of America’s executive branch of government and its most important citizens, should the unthinkable happen. When the world ended, the executive branch failed to reach the sanctuary, but the elite citizenry did. Eighty years later, one of their own has named himself the new President of the United States. His plan? Subjugate the survivors of the American Wasteland using the same bunker resources meant to rebuild it. The only thing standing in their way is a deadly Wasteland girl, hellbent on revenge!

The first comic to tell original, in-canon stories set in the Blade Runner universe
returns! It is 2029 and Blade Runner Ash continues to hunt the streets of the rain-
soaked dystopian world of Los Angeles for renegade Replicants, but this time she’s
trying to protect as many as she can find.
Written by Academy award-nominated screenwriter MICHAEL GREEN
(Blade Runner 2049) and co-writer MIKE JOHNSON (Supergirl)!

THE ONE YOU’VE BEEN WAITING FOR – THE RETURN OF VENGEANCE!
MICHAEL BADILINO was a bad dude in life… and that landed him in hell.  But not just any old rung of hell, a layer so deep it’s reserved for those special enemies of hell – one where a former SPIRIT OF VENGEANCE may suffer for all eternity!
As LILITH’s gambit against JOHNNY BLAZE and MEPHISTO for the throne of hell heats up, you can bet other players will enter the arena… and Badilino will find a way to ride again as VENGEANCE!
Fan-favorite GHOST RIDER creators Howard Mackie and Javier Saltares return to the saga of the Spirits of Vengeance in an all-new tale as Vengeance brings his own brand of hellfire to the Marvel Universe!

Iron Man has risked everything to save Eddie Brock, but now he’s left with nothing but guilt. As longtime ‘frenemy’ Doctor Doom shows up with both counseling words and ulterior motives, they’lll be forced to battle an all-too-familiar specter of the holiday season-albeit one now twisted and controlled by the recent invasion of Earth by the symbiote homeworld. As Iron Man and Doom fight as temporary allies, their unexpected encounter both with each other and a horrifying inversion of yuletide joy may ultimately reveal to them the true meaning of Knull-mas.

Endless Winter chapter eight! Seeking to bolster his nation’s place in the world, Black Adam arrives in Gotham City demanding action to end the threat causing an endless winter across the globe. But Black Adam isn’t telling the world’s leaders everything—especially not that he’s faced the mysterious Frost King before and won. Find out what Adam’s hiding in the penultimate chapter of Endless Winter.

The DCU’s darkest secrets are explored while two titans clash! The heroes search for a way to defeat the Darkest Knight through the universe’s past, while Superboy Prime faces down the demonic Batman!

What would it take to get every being left in the Multiverse to side together in the ultimate, final showdown? Total decimation and the complete undoing of all existence? The Batman Who Laughs has made his final move, bringing the most horrifying opposition to the battleground, and now every hero and villain left alive will stand and fight together. This epic battle book details every side of the last war across the Multiverse—Wonder Woman leading the heroes, Superman leading the villains, and Batman leading the dead—everyone has to play their part. Everyone and everything is at stake…so join here for the last of the DCU as we know it!

TALES FROM THE DARK MULTIVERSE DARK NIGHTS METAL #1 (ONE SHOT)

In the event-defining epic Dark Nights: Metal, the Justice League defeated the vile Barbatos and his Dark Knights to save our universe from sinking into the abyss of the Dark Multiverse. But…what if they failed? What if Barbatos reigned victorious? Enter an alternate timeline where the DCU as you know it has been dragged down into the darkness. Witness the Justice League you once knew, hideously transformed into dragons who serve at the mercy of evil.<p>Duke Thomas, the Last Monitor, will have to seek out Nightwing and the few remaining survivors of the Metal event to assemble the Final Justice League in an attempt to save the Multiverse. Featuring a story by Metal architect Scott Snyder, rising stars Collin Kelly and Jackson Lanzing, and art by red-hot artist Karl Mostert, you won’t want to miss the biggest, loudest arena rock concert in the history of the DC Universe!