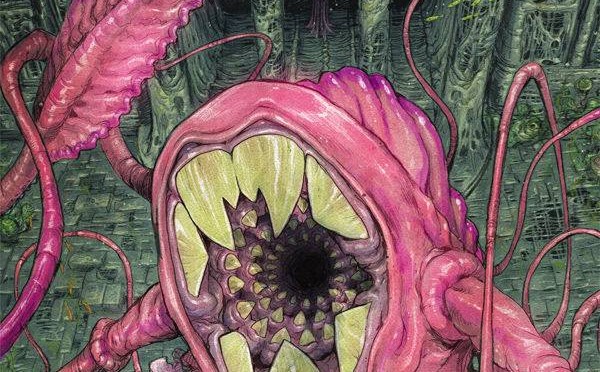 Local writer extraordinaire drops a new comic of madness this week from Dark Horse Comics. Prepare yourself you are about to enter NEGATIVE SPACE…

When one man’s writer’s block gets in the way of his suicide note, he goes for a walk to clear his head and soon uncovers a century-old conspiracy dedicated to creating and mining the worst lows of human desperation.

ADD IT TO YOUR STANDING ORDER

Polo Lonergan at Nerd Underground gives us a 9.3/10 [LINK], saying “if you’re a fan of detailed art, heart-busting stories, and interesting characters then pick it up.”

Erik Cheski at Fanboy Comics said “Lindsay seems to be a disturbed human, and I hope he forgoes help in order to continue tossing his damage onto the pages.” [Which is kind of the best recommendation ever.] [LINK]

Greg Silber at Adventures in Poor Taste gave us 9.5/10 [LINK], saying “Negative Space is the most promising new science fiction series I’ve encountered since Saga.” [Wait, this is the best rec ever ever, wow.]

Clay N Ferno at Forces of Geek gave us [LINK], saying “This is another great book from Lindsay and the artwork is intricate and moody.”

Jason at Brutal Gamer gave us 9/10 [LINK], saying “Dark Horse’s newest foray into the world of horror and the supernatural comes along with one of the most interesting main character’s and plot lines that I’ve read pretty much ever.”

OmniComics drops a great review on us [LINK], saying “The very first page is a very strong showing by Gieni that effectively captures the despair of a man on the brink.”

Johnny Hughes at Comic Crusaders gave us 5/5 [LINK], saying “This book feels like an opus.  I cannot say enough great things about it.  There is not a bum note anywhere in it pages.”

Forrest Hollingsworth at Comics: The Gathering gave us 9/10 [LINK], saying “Negative Space is a hard, sad, and incredibly important read.”

Raisa at Florida Geek Scene gave us 9.7/10 [LINK], saying “One of the most engaging, creative, and well-executed books I have read to date.”

Nikki S at The Outhousers said many nice things [LINK], including “Ryan K. Lindsay and Owen Gieni bring us a brand new series, which I’m pretty sure is the equivalent of an anti-prescription for depression.”

Ian Simpson at Geek Syndicate gave us 4/5 [LINK], saying “Lindsay and Gieni have set up an intriguing premise and left us some delicious threads hanging ready for the next issue. There is no wasted space here.”

Amber Santos at Pulp Cultured said many nice things [LINK], including “with Negative Space they have hit another golden series under their belt.”

Nat Brehmer at Wicked Horror gave us 8/10 [LINK], saying “if you like weird, paranoid sci-fi horror, you should definitely give it a look!”

Bhavna Bakshi at Comic Wow assigned us a perfect 10/10 score [LINK], saying “This, my friends, this is divine catharsis.”

Plus, if you want more, hit up these interviews from Ryan about the book:

And figure out why the book has already been deemed “buzzworthy” by CBR [LINK] and Multiversity named it one of the Top 10 Books coming from Dark Horse in July [LINK].